HOMELESS AND LIVING FROM A BACKPACK..... NOT HERE YOU DON'T

First off, let me say to those that read the last blog, and turned the whole thing  semi-viral, my heart felt thanks.   The whole  'Super Bowl Party in San Jose' never materialized... The rest of the free world say  'San Francisco Super Bowl', where San Jose saw  San Jose Superbowl....   No dice San Jose,  the people went the other direction.

So....   Wanna know what the  MLK library is going to do for the homeless community now. I guess I used the wrong word there..... not  'FOR' the homeless but  'TO' the homeless.

I have it on pretty good authority that coming soon, to an entrance at  MLK library will be a box.  Sort of like those at airports.   Does your carry on fit in this box, Ok fine.  If it doesnt, please check it.   Now the MLK approach will be slightly different.   If you have a bag, as ALOT of the homeless community do, your bag will be subject to the  'Does it fit in this box' test.   Doesn't fit ?  Get out!

Yup, if you are in the faction that lives out of a bag, don't expect to be able to go into MLK library. Now I do understand where a ruling like this comes from.  It wouldn't take one long, while wandering around in the MLK library, to see a few different people that have mounds and mounds of 'things', that are piled up behind or next to them.  Some of these 'things' you would probably want to keep a distance from, be it either the aroma, or concern about having one crawley thing or another jumping on to you or your belongings.

This is where it should be requried of the security personel to understand that there are grey areas of some issues. If a business person comes in, needing to do some emergeny work on a computer, and has a tote behind, with various work essential materials, are they going to be stopped and told to leave them elsewhere....   I doubt it.      If I go through the front door, and need to sit at a computer for an hour or so, to take care of personal items, am I going to be allowed through the door ?  Nope.

I've talk with security in the MLK library.  I understand there are times where these rules are required.  There is a   'no food' near the computers policy.  Not open food, ANY food.  If you have an sealed package of anything that's digestible, and a member of the MLK security recognizes it as such, you are subject to immediate expulsion from the library....   A bit over zealous, no ?    I understand that if you have some enormous bag, thats blocking the aisle way, or has 'creepy crawlies' jumping off it, then yes, that bag should be pointed out to it's owner, and asked to remove it, for the sake of everyones health and well being.

My bag ?   Here's a pic....   a 65 liter bag, with sleeping bag attached....  Bag containing three flutes, a change of clothes, hygeine supplies, and on occasion, a bit of food....  show here inside the MLK library 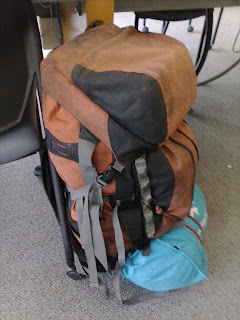 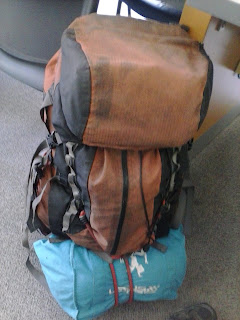 Come on, San Jose, and MLK library....    This isn't rocket science.   Recognize the problems, and address them, don't just throw a massive blanket over something, and say 'anything that lies within this, is  no longer tolerated'.    It's just not that complicated.

So, feel free to comment on this, or email me, or tell me I've got my head up my ascii....     Just don't tell me because I live out of a backpack, that I shouldn't be allowed to use a public library.